Orca combatants who were preparing for New Year's party just like last year. Under the guidance of Hraesvelgr's guidance, Densetsu's Kaen and Leanne prepares for a stage performance under the guidance of Hraesvelgr. Kaen puts her heart into the climax scene where Kaen points her sword at Zero, but the coach Hraesvelgr bellows at Kaen on how she doesn't seem to have "soul for acting", making Kaen search for "something" to awaken that soul.

Conveniently, Barbariana who was preparing for the party mentions how Bismarck Corporation she was in also had character development department at par with Densetsu's, and because the main office's not too far away, she would help find the item to solve Kaen's problem. Combatants manages to find Bismarck Corporation's main office, and travel there together with Commander. And there, they are invited to the paradise that could grant every wishes...

Story about that paradise will be revealed on December 21st. 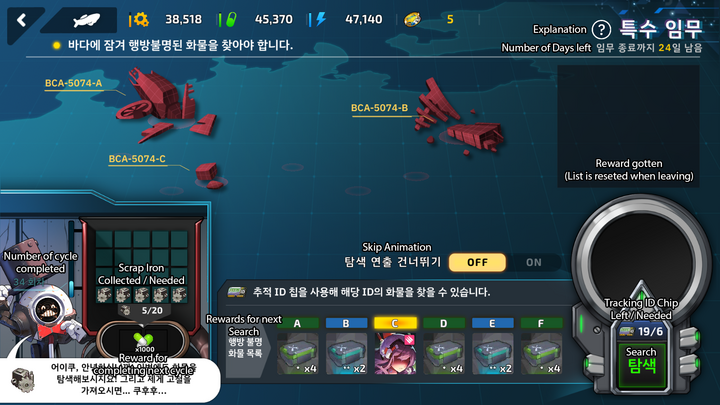 Note: Image taken from Aria of the Elven Town, but they function basically the same

Players can use Freight Tracking ID Chips collected from Exploration and Daily/Weekly Missions to perform Searches. Each Search costs 6 Chips and return 1 of the 6 rewards, together with a number of Scrap Irons corresponding to the tile of that reward (A is 1, F is 6, etc). The rest of the rewards to the right of the one collected is added to the next 6 rewards, starting from A. There are several set of rewards, each containing 20 rewards in fixed order, with a different one continue after a set is completed.

In essential, this is a dice rolling game where you get reward based on the number of steps traveled and the tile you land on.

After a Search is complete, there is a chance for a free Search to appear, which can happen up to 10 times consecutively.

For each 20 Scrap Irons, a cycle is completed (You actually need to get to the next cycle for it to count as completed), rewarding players with 1000 of one Resources in order (Part to Nutrient to Power, and back to Part). There are also additional rewards for reaching a certain number of cycles.