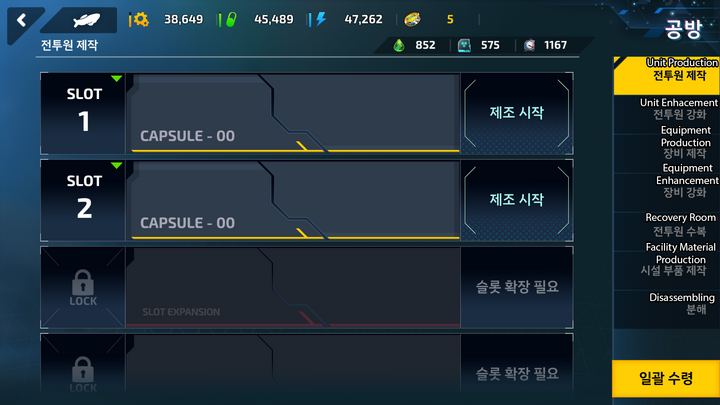 This is where you can produce Bioroids by spending Resources. It requires 1 Genetic Seed and a minimum of 90 Parts, 90 Power and 90 Nutrients. The Nutrients are then distributed into groups of 3 for the head, chest and leg areas. However, you can increase the chances of getting a higher ranked unit by increasing the distributed amount of Resources up to a maximum 990 per resource. The amount of Resources you put in will also affect the type of Bioroids that can be produced. Note that Heavy-type Bioroids are NOT available in Normal Production. 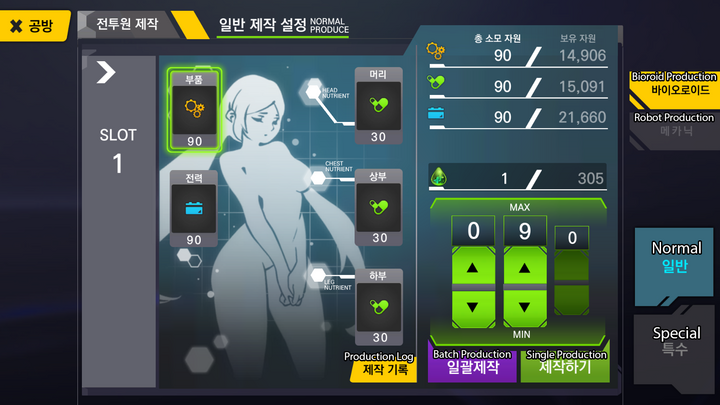 You can also use the Production Log to see what recipes other players used to get a specific group of units and quickly copy said recipes. Note that this is only a reference and you are NOT guarantee to get the same unit they did. 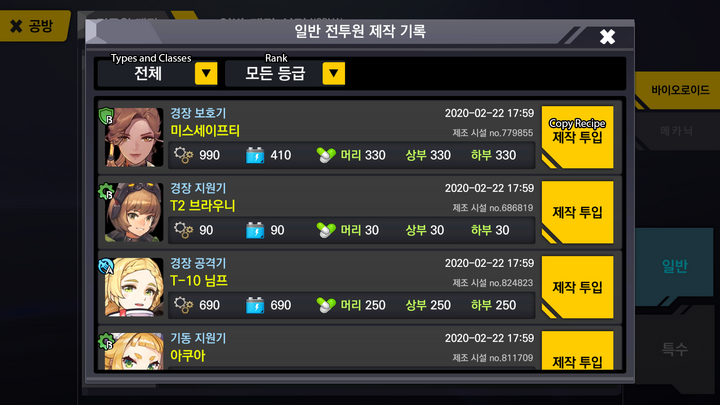 Feb.21 2020 Patch also added the Batch Production function, allowing Players to produce a large number of units using the same recipe in all of their free Production slots. 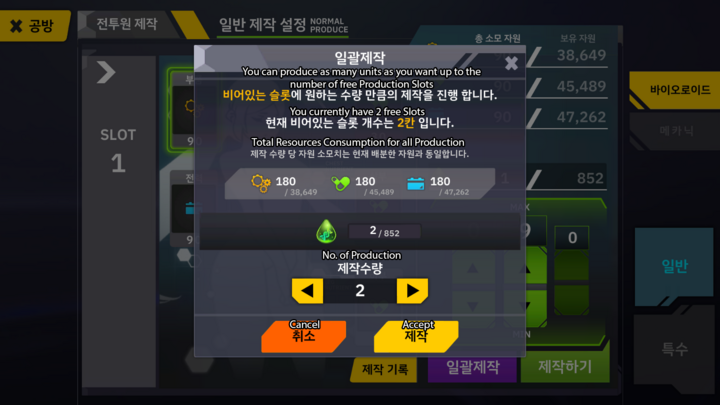 Upon distributing the Resources, you will be taken back to the previous menu, where you can see how long the bioroid will take to produce. You can find out which unit you've created using the Bioroid Crafting Table below. However, using Normal Production means you cannot create Heavy-Type Bioroids until you've done the Research required for Special Production. 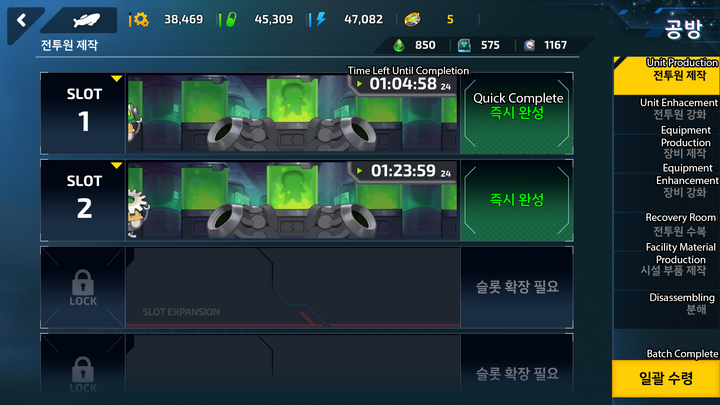 AGS Production works similarly to Bioroid production, but the key difference is that you can select which AGS Robot you want to produce. However, it is necessary to unlock the AGS Robots for crafting through the AGS Research Tree, located on a separate tab in the regular Research Tree Menu. 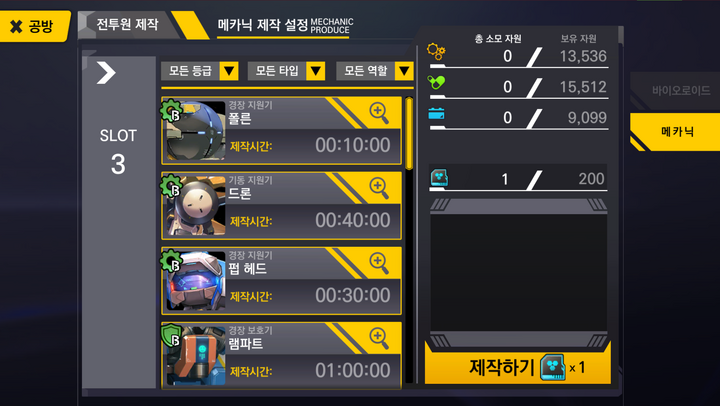 Each unit also consumes a different amount of different materials, including Items and Resources. They do not require a Genetic Seed but instead require an AI Core to be constructed.

Special Production works almost identically to normal construction, but the amount of Resources spent is much higher. It requires a minimum of 990 Parts, 990 Power and 990 Nutrients. The Nutrients are then distributed into groups of 3 for the head, chest and leg areas. You can also increase the chances of getting a higher ranked unit by increasing the distributed amount of Resources up to a maximum 9900 per resource. The amount of Resources you put in will also affect the type of Bioroids that can be produced. 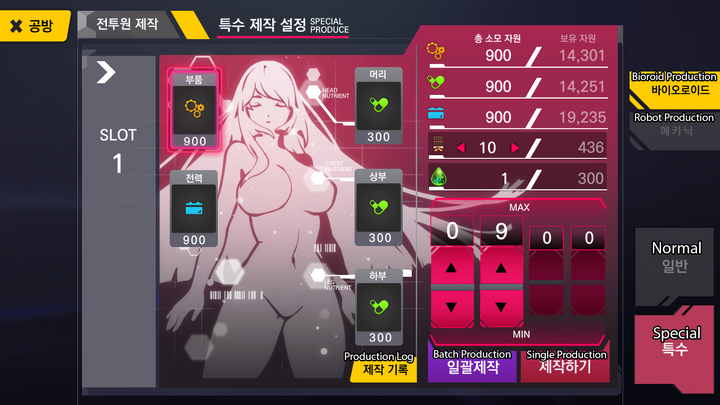 It also costs a minimum of 10 Advanced Modules to create. However, increasing the amount of modules (to a maximum of 100) also increases the chance of getting an S Rank or higher Bioroid. It is also confirmed that if you put 100 red modules in the recipe you'll be guaranteed to get an S rank or higher Bioroid. This production method is also the only way to craft Heavy-Type Bioroids. 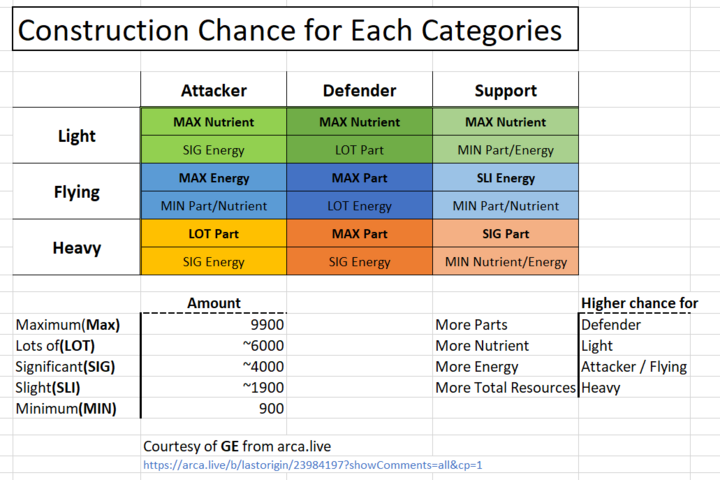 Unit enhancement is where you can upgrade the individual stats of a unit. You can do this by distributing points that the unit gains each time the unit levels up. For each level, the unit gains 3 points to distribute, for a total of 270 points when they reach level 90. 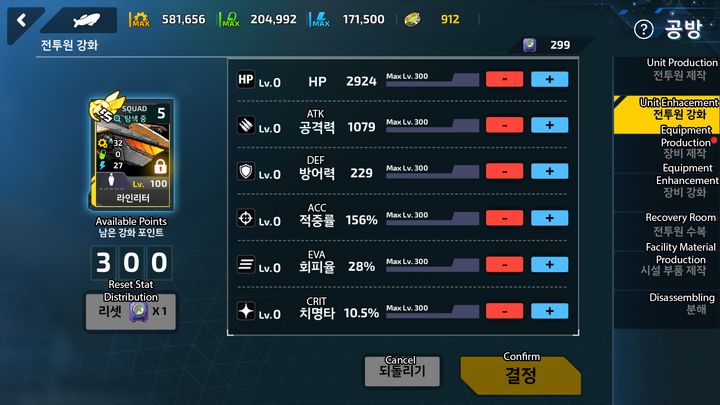 Each unit has six stats they can upgrade; ATK, DEF, HP, ACC, EVA, CRIT. These stats all start off with a max level of 30 but can be increased using the button below the "Max LV" in the bottom-left corner. Here you can select a number of other Bioroids, AGS Robots or Enhancement Modules, each with one or two stats that they increase the max stat cap of.

Once selected and confirmed, the units will be consumed and the Bioroid's stat level caps will increase. As you level up the caps, they require more and more fodder to level up further.

The value of each stat per point distributed is different from each other. They are listed as follow:

You can undo your current distribution of stats before confirming by pressing the red loop button. Note that this does not refund points that you have already confirmed the distribution of. To reset the stat of a Bioroid, you need to press the purple button on the left, which will cost one Stat Reset Module every time. These should be used sparingly, but it is worth noting that increasing the wrong stats does not have a huge impact and min/maxing stats is not required at all, until late into the game. 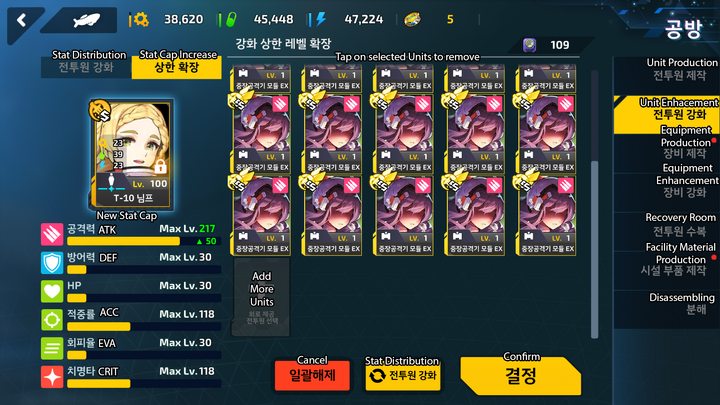 Here, you can create every type of equipment, including Chips, OS, and Auxiliary Equipment. It requires a minimum of 10 Parts, 10 Power and 10 Nutrients in order to make one Equipment item, but each one of these can be maximized to a total of 990 of their respective resource. It also requires one Battle Gear Core in order to commence with the creation. The amount of Resources you put in will affect the type of the equipment being produced. 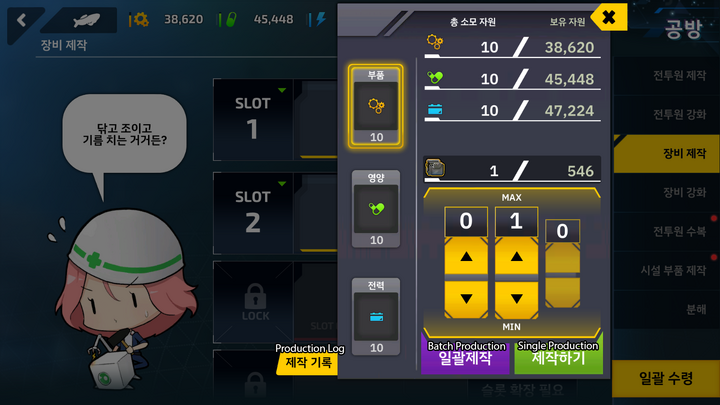 Similar to Bioroid Production, you can check Production Record, use Batch Production and Batch Complete for Equipment Production. 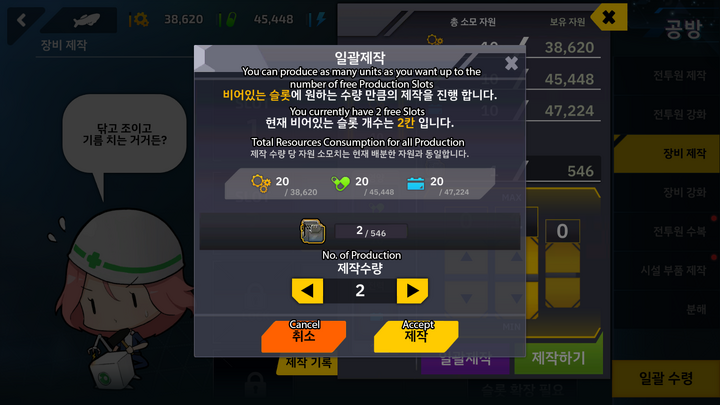 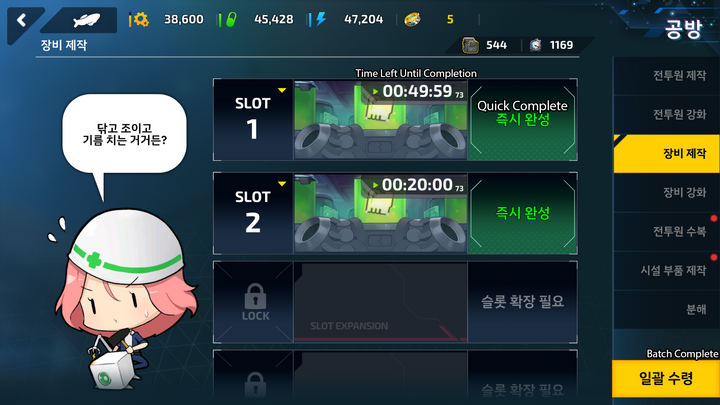 This is where you can enhance your existing equipment. You can upgrade your equipment by first selecting which item you'd like to upgrade, then by selecting a number of other pieces of Equipment or fodders you'd like to use as materials for the upgrade (max. 17 at a time). It's also important to notice that the amount of exp gained from enhancement is equal to the amount of Resources spent. Thus it makes Equipment extremely costly to upgrade. (The resource required can be reduced with Research).

All Equipment can be upgraded from 0 to 10, and every level will enhance the effect of the equipment. However, the EXP needed to reach level 10 differs greatly for each piece of Equipment (from 14k EXP to 52k EXP for SS rank equipments). It's also noteworthy that for some Equipment the stat increase at each level is non-linear while others have linear growth. The growth is also independent of the original stat, which makes some seemingly negligible effects at level 0 become extremely potent when maxed. 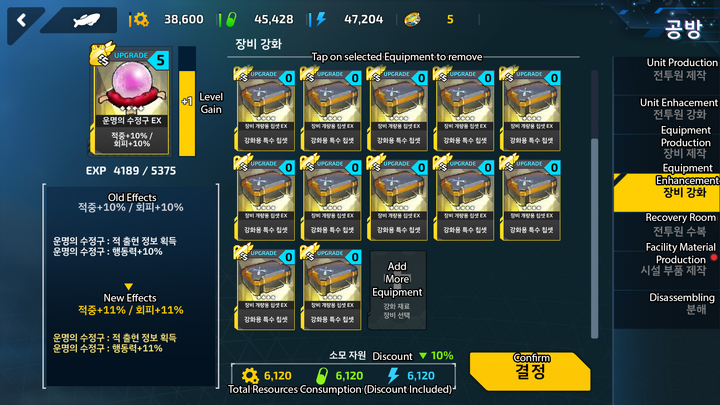 This is where you can recover a unit's HP if it falls below 25%. The Resources needed for recovery is affected by the HP lost and can be extremely costly in that regard. You can choose to either leave the unit to recover over time or to spend Quick Fix Nano Machine in order to instantly recover the unit's health, which are given to the player frequently, so using them often is not very punishing.

However, some units have unique abilities that benefit them by having low health, such as May, so the player is advised to consider leaving units at low HP in order to maximize their efficiency, but this is not required to complete any parts of the game and can be avoided. 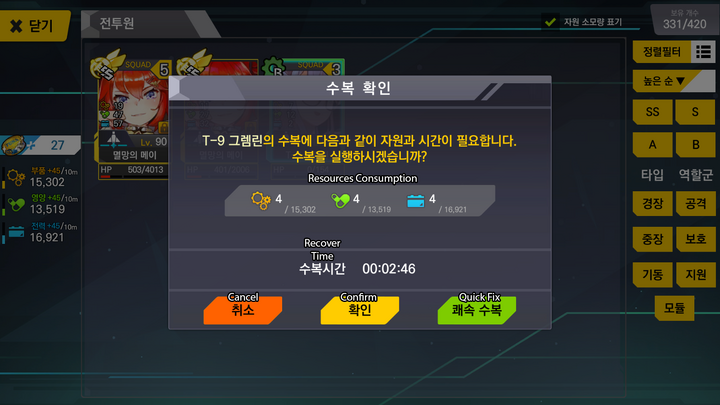 The new Production system added to the game together with the addition of the new Base's Facility System. This is where Facility Materials for certain type of rooms can be created using Synthesis Resin, Varnish and Iron.

The procedure is similar to normal Unit & Equipment Production, albeit with different resources and no Production Log.

Due to the lack of Production Log and the fact that this system is relatively new, there is not much known about general recipes to get certain types of material. 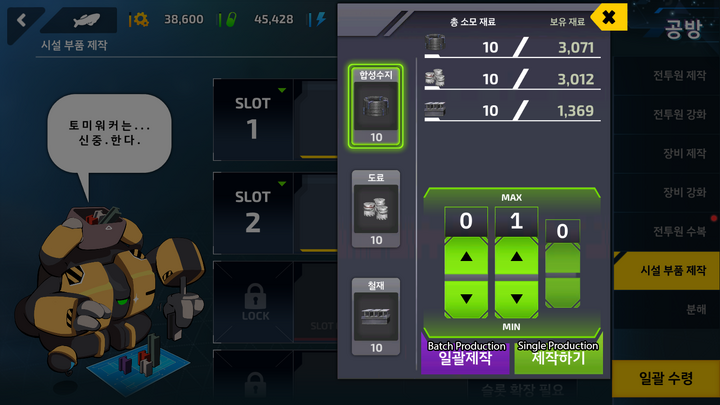 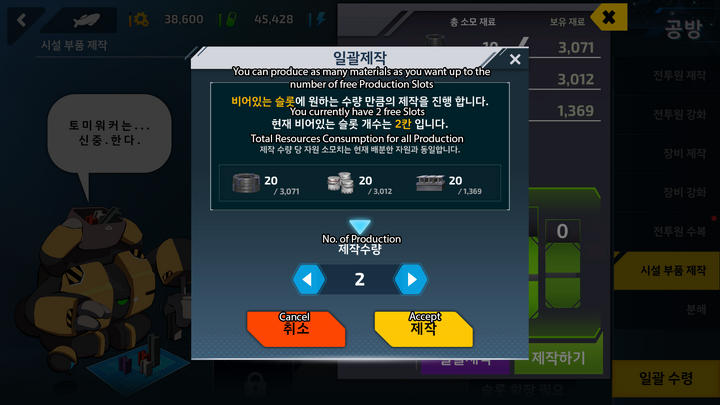 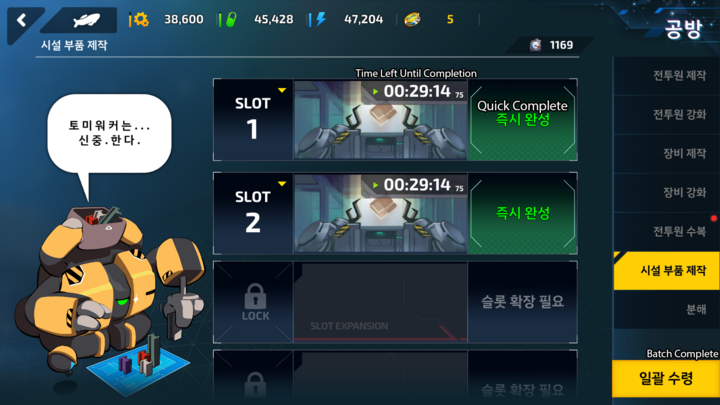 This is where you can dispose of Units and Equipment in order to gain back Resources and Modules depending on the rarity of the Units or Equipment being disposed. Simply select either Units or Equipment using the tab located at the top right, then select what you want to get rid of, then confirm to dispose of them.

The amount of Resources you gains by Disassembling can be improved with Research.

Feb.21 Patch added the ability to quickly select all B-rank Units/Equipment to be disassembled. 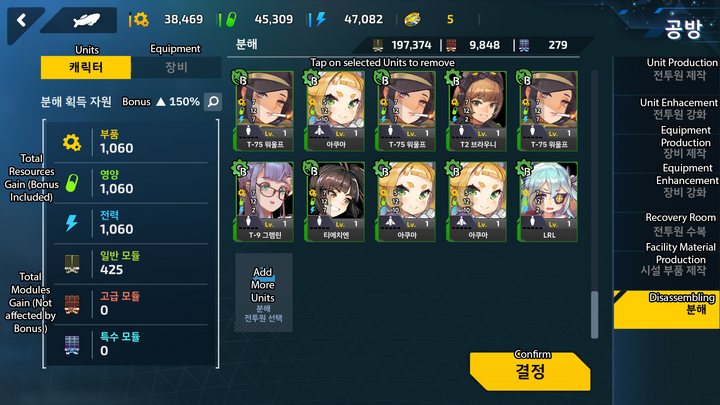 Retrieved from "https://lastorigin.fandom.com/wiki/Workshop?oldid=14430"
Community content is available under CC-BY-SA unless otherwise noted.